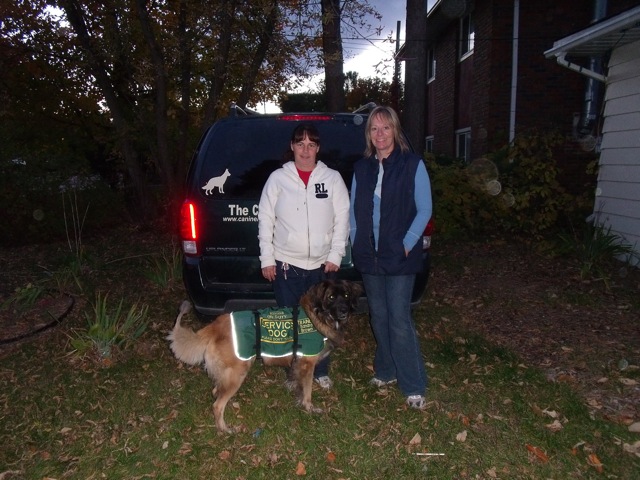 I bought Cocoa as an eight week old puppy, she was our first mixed breed dog in 11 or 12 years. Up until that time we had a Shih Tzu named Cujo.

When I brought Cocoa home I realized that I would have to do a lot of training for her as she was still just a puppy, and she was now in a new home with new rules, which she liked to test on a regular basis. I taught her how to use her manners while eating, I taught her how to go outside when she had to go, I taught her numerous other things as well, one of which was to walk on a leash. This was the one thing that Cocoa and I disagreed about, my idea of taking the dog for a walk and her idea of going for a walk were two totally different things. So for the next six years Cocoa dragged everybody around at the end of her leash, thinking this was a particularly funny way to take her humans for a walk.

As a person who spent her life in all types of sports and activities, it was hard to admit that I needed help when I got sick. One night while I was pondering the idea of a service dog, Cocoa came over and put her head on my lap and looked up at me with her big brown eyes, and I wondered if she could be trained to help me. When it was time for Cocoa’s yearly shots I asked the Vet if he knew of anybody that could train dogs. He handed me a card and said try this lady she works with dogs, the name on the card was Sandra Brown.

I called Sandra and explained my situation, and what I was looking for with Cocoa, basically I needed her to be able to come with me everywhere and help me physically and emotionally. We set up an appointment for her to meet and assess Cocoa. The first thing she told me was that Cocoa had her age against her, because she was six and for those years Cocoa was pretty much allowed to do what she wanted. Once Cocoa had her first lesson with Sandra, she realized that it was fun to work for something, so Cocoa took to the lessons like a pro. She had a lot to learn and it was not easy, but with Sandra’s help and gentle encouragement we settled into a routine and worked hard. Sandra didn’t just take a dog who loved to run at the end of a leash with her humans dangling behind and teach her how to walk properly, she trained the human as well. Sandra taught me how to walk with my dog, she taught me how to hold the leash, she taught me not to be afraid to let Cocoa know that I was in charge not her, with gentle encouragement and reminders and finally, she taught me how to look at the world through Cocoa’s eyes. Cocoa learned how to be there for me when I need her, and it seems like she can’t do enough for me, she is always looking at me with a quizzical questioning look. I have always been proud of Cocoa because she was always been a quick learner, but I am even more proud of her talents and skills now.

Listening to Sandra speak to me about my dog during that first visit was like listening to a foreign language, one that I had to learn. With Sandra’s help I learned how to view the world from Cocoa’s eyes, and I learned how to read my dog, so that she could be there for me when I need her. Sandra is a firm believer in kindness to get the message across. I have seen what happens to far too many dogs when kindness is taken out of the equation, they end up at an unfair disadvantage. Sandra’s gentle nature and unbelievable knowledge of our four legged friends is unprecedented, In one year Sandra took a dog that had no boundaries or duties, and gave her a new look on life and what she could do for her human. Cocoa has turned into an unbelievably talented service dog.

Enter your details in the form provided below and Sandra will contact you to discuss your requirements!

Having problems with your canine companion? Contact Sandra today on the details provided below:

Click the links below to find out more about our services:

Follow Sandra online to keep up to date with all our latest news and information!

Scroll Back To Top